"Without deviation from the norm, progress is not possible." -Frank Zappa

Dec 4, 2022: New York Post: ​Shania Twain used to ‘flatten’ her boobs to protect herself from stepfather’s abuse
​Country singer Shania Twain revealed Sunday that she used to flatten her boobs in her childhood home to avoid being sexually abused by her stepfather, Jerry Twain.
The 57-year-old singer said that Jerry Twain would allegedly physically and emotionally abuse her while she lived in the house, reports The Sunday Times.
Nov/Dec 2022:  Smithsonian Magazine: ​A Pilgrimage to Honor a Blues Legend
With a mysterious memento from long ago in hand, a devoted fan of the blues artist Mississippi John Hurt returns to the Delta
Dec 4, 2022: Variety: ​Jessica Chastain and Michael Shannon Reveal Secrets of Learning to Sing Like Country’s Royal Couple in ‘George & Tammy’
Variety caught up with the actors as they made the rounds recently to discuss playing George Jones and Tammy Wynette in the six-episode limited series, which premieres Sunday night on both Showtime and Paramount+. (It’ll be a Showtime exclusive for the following episodes.) They discussed how they worked with vocal coaches and music producers to arrive at the literal voices of Jones and Wynette, and also considering the psychology that made George and Tammy’s lives into such an immutable, lifetime duet, whether or not the two were technically together.

​From one songbird to another: Harry Styles is paying tribute to late Fleetwood Mac musician Christine McVie, who died Nov. 30 at 79.
The "As It Was" singer, who is currently on the Latin America leg of his Love on Tour, honored McVie by performing an emotional cover of the band's 1977 track "Songbird" during his concert at the Estadio Bicentenario de La Florida in Santiago, Chile, on Thursday night.  -​Watch Harry Styles pay tribute to Fleetwood Mac's Christine McVie with 'Songbird' cover at Chile concert 12.2.22
Dec 4, 2022: ABC News: ​Bidens to attend Kennedy Center Honors for Gladys Knight, George Clooney, U2, more
This year, the John F. Kennedy Center for the Performing Arts will honor actor and human rights activist George Clooney, singer Amy Grant, performer Gladys Knight, composer and conductor Tania León and Irish band U2.

​2ManyDJs have spoken to NME about the legacy of their ‘As Heard On Radio Soulwax Pt.2′ mix, as well as the indie dance scene of 2002 and counting David Bowie as a fan.
Brothers David and Stephen Dewaele, who are also members of Soulwax and run the DEEWEE record label, rereleased the classic 2002 mash-up album last week. A highly influential mix of the time, it combined the worlds of pop, rock, rap, indie and dance – bringing together the likes of Velvet Underground, Destiny’s Child, Felix Da Housecat, New Order, Peaches, Sly & The Family Stone and beyond.
This, and their subsequent mixes, releases and legendary DJ sets, would help shape the decade’s dance-punk scene and indie nightlife. One fan was Bowie who hailed their mixes as “dynamite combinations” and would repeatedly praise them in the press. The pair would later make a Bowie mix and accompanying film, DAVE, as Radio Soulwax.  -2ManyDJs: “David Bowie used to post on our web forum”  12.1.22

​It was strange enough being in Christine McVie’s flat – high up and hovering over a stretch of the River Thames in Battersea with an upright piano in the corner of the room (oh, to be her neighbour). But it was stranger still hearing what she had to say. As we sat together on her light grey sofa in December 2013, McVie told me how she had left Fleetwood Mac in 1998 thinking that she wanted a quiet life in the Kent countryside with her dogs and Hunter wellies. But that hadn’t been what she had wanted at all. Fifteen years on, McVie was restless, isolated, a little lonely … and wouldn’t it be nice if she could be back playing with the band? “If they were to ask me, I would probably be very delighted,” she ventured nervously.  -‘I would probably be delighted’ – how Christine McVie opened up about wanting to rejoin Fleetwood Mac 12.2.22
Dec 2, 2022: Far Out Magazine: ​From Buckingham Nicks to David Bowie: Christine McVie’s 10 favourite songs
Dec 1,2022: The Guardian: ​Mother Earth, musical prodigy or steely powerhouse? The enigma of Christine McVie
Through Fleetwood Mac’s most turbulent times, she held the line – and wrote some of their most beautiful, bittersweet songs. We pay tribute to Christine McVie
Dec 1, 2022: ​IDiscoverMusic: ‘Happy Xmas (War Is Over)’: So This Is Christmas, With John And Yoko
​John Lennon’s seventh single outside of The Beatles was written and demoed in October 1971 on acoustic guitar with Yoko Ono in their New York hotel. It had them entering into the spirit of Christmas in their own special way, with an anti-war sentiment and, as John was reported as saying, because he was fed up with “White Christmas.”
The song, of course, was “Happy Xmas (War Is Over)”, recorded almost immediately at the Record Plant, co-produced by John and Yoko with Phil Spector, and released as a single in America for that 1971 holiday season, on December 1 that year.

​Last month, Mick Mars, the guitarist of the legendary Los Angeles-based heavy metal outfit Motley Crue, announced that he would be retiring from touring, and will no longer perform shows with the band. While Mars has stated that he is only retiring for health reasons, and will continue to work with Motley Crue in the studio, one person is skeptical of Mars’ story: John Corabi, the former guitarist for the metal band. --Former Motley Crue Member John Corabi Is Skeptical About Mick Mars’ Retirement, Thinks Mars Was “Shown The Door”  11.30.22 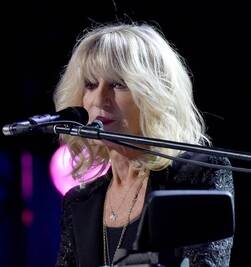 ​Nov 30, 2022: Kenosha News: Obit Christine McVie
Christine McVie, the soulful British musician who sang lead on many of Fleetwood Mac’s biggest hits, has died at 79. The band announced her death on social media Wednesday, saying “there are no words to describe our sadness at the passing of Christine McVie.” No cause of death or other details were immediately provided. McVie was a steady presence and personality in a band known for its frequent lineup changes and volatile personalities. During its peak commercial years, from 1975-80, the band sold tens of millions of records and was an ongoing source of fascination for fans as it transformed personal battles into melodic, compelling songs.